We are really happy to hold Michael Betancourt's Stan Lecture on June 4 at DWANGO. To tell the truth, this is not the first Stan meeting in Japan. Three BUGS/Stan meetings were held about 2 years ago.

DWANGO is a very famous company for its video service (nicovideo), and the following lectures were broadcast using it. I'm surprised that there were 400+ listeners even contents were English and specialized.

That movie includes the next presentation. The slides are here.

Dealing with latent discrete parameters in Stan from Hiroki Itô
This lecture was based on the book Hiroki translated:

The above book is about BUGS, but Hiroki has translated all of them into Stan, and pushed them to the official repository of Stan. github.com Ch.06 is the first directory that contains source codes of data augmentation.

The slides are here.

Replica exchange MCMC from . .
Source codes are here. The details are here (in Japanese). statmodeling.hatenablog.com I'd like to supplement the answer to the question. Simulated annealing can reach optimum, but replica exchange MCMC can get the distribution. That is a big difference.

He started his talk from an overview of tall data and wide data, then stepped forward to Hamiltonian Monte Carlo (HMC) which can do efficient sampling of high dimensional models (i.e. many parameters). His introduction of HMC using gravity was really nice. Xiangze who was one of the participants posted a good blog about that (in Japanese). xiangze.hatenablog.com NUTS is an algorithm that can tune the parameters in HMC automatically. The details of NUTS seemed to be cut because it was hard for us to comprehend. He also introduced Adiabatic Monte Carlo (arXiv) maybe for my presentation. Thank you! The animation was so cool.

I'd like to quote part of JSS paper of Stan.

Betancourt and Girolami (2013) provide a detailed analysis of the benefits of centered vs. non-centered parameterizations of hierarchical models in Euclidean and Riemannian HMC, with the conclusion that non-centered are best when data are sparse and centered when the data strongly identifies coefficients.

However, it is generally difficult to measure the sparseness of data, so the recommendation could be the following (from the JSS paper).

It seems that we can also use non-centered parameterization partially (i.e. a stratum or a group).

Thank you very much again, DWANGO, our stuffs, Hiroki and Michael Betancourt! 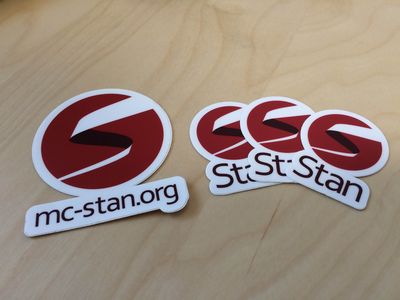